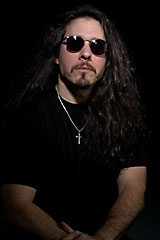 Gene began playing bass in 1978 at the tender age of 11. Two years later he bought his first guitar. He began writing his own music immediately. He has played in a variety of bands, in a variety of styles. His primary influences were Kansas, Genesis, Yes and Boston. That is, until his two best friends, Tim (Fred) and Jake (the Snake), introduced him to Iron Maiden and Judas Priest. He then found his way to Joe Satriani, Queensryche, Collective Soul, Extreme and finally, Dream Theater.

Gene came to the Lord sometime during high school, due in no small part to the influence of Kerry Livgren of Kansas and AD. While his search for God lead him directly to Christ, and he accepted and understood Jesus as the true Son of God and his Savior, it took Gene some time to truly form a relationship with Christ that would become a central focus of his life. 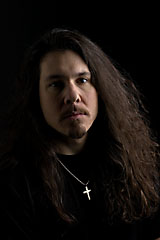 Eventually, Gene made his way into the University of Miami's Music Theory and Composition department. There he began really composing, incorporating MIDI sequencing and synthesizers into his auditory palette. After getting his Bachelors in Music Composition, he wound up in Colorado as an audio engineer. This is when he would begin a process of searching and learning that would bring Christ into the rightful place of Lord over his life.

Now Gene is putting all his talents to work for the Glory of God. One of his favorite musical quotes is from Joe Walsh: " The music tells me how it wants to be. I help it write itself down. " Only in Gene's case, he gives God all the credit for his music. 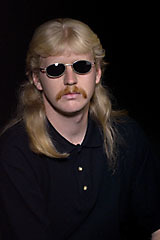 Bob started in music playing Piano from age 9 to 12. He also played drums from about 11 to 18. However, it was at the age of 12(ish) that he found his true love of the 4 string beasty bass. Bob's main influences are several of the bass masters; Gene Simmons (Kiss), Steve Harris (Iron Maiden) and Geddy Lee (Rush). 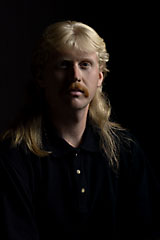 Unfortunately, Bob does not have enough fingers and toes to count all the many bands he has been a part of. The genres are equally as varied; Rock, Speed Metal, Jazz, Latin, Swing and Fusion just about covers them. While many of the bands have been money earners, his profession is a bit more technical. Bob graduated from South Dakota School of Mines and Technology with a Bachelors of Science in Electrical Engineering.

Outside of America Gomorrah, Bob also plays bass for the worship team at Victory Church in Westminster, CO.

Bob currently plays either a standard Fender Precision or a truly sweet Precision Fretless through his Peavey Bass amp.

Like Bob, Carl also began his musical life on the piano. But at around age 11 he was introduced to the drums. He has been slamming the skins ever since. Carl grew up in a little town in Washington State named Fall City, just outside of Seattle. After graduating from high school, Carl and some buddies formed a rock band by the name of Prowler. Interestingly, Prowler performed in a "battle of the bands" against another band which would eventually reorganize and become known as Queensryche. Prowler won. Who'd a thunk it? 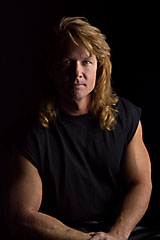 After Prowler eventually dissolved, Carl found the Lord. Or more rightly, the Lord found Carl. Life then took Carl on a bit of a tour. After a brief stay in Montana, he wound up in Colorado. Mistakenly thinking he was going to stay here, the Lord then lead him off to one of the more popular tourist spots in the world, Antarctica (doesn't everyone go there?). With not much else to do besides work, Carl and some other wayward travelers formed a band which was, pretty literally, the entertainment for the continent!

Carl finally found his way back to God's country - Colorado, of course - and has been living in Alamosa while he awaited the formation of America Gomorrah.

When Carl is not sitting behind his chrome caged Pearl tour set, he can be found testing the design limits of his Roland V-Drum set. FYI, don't let anyone tell you you cant run two PD-120 kicks into one kick trigger input on the TD-10!